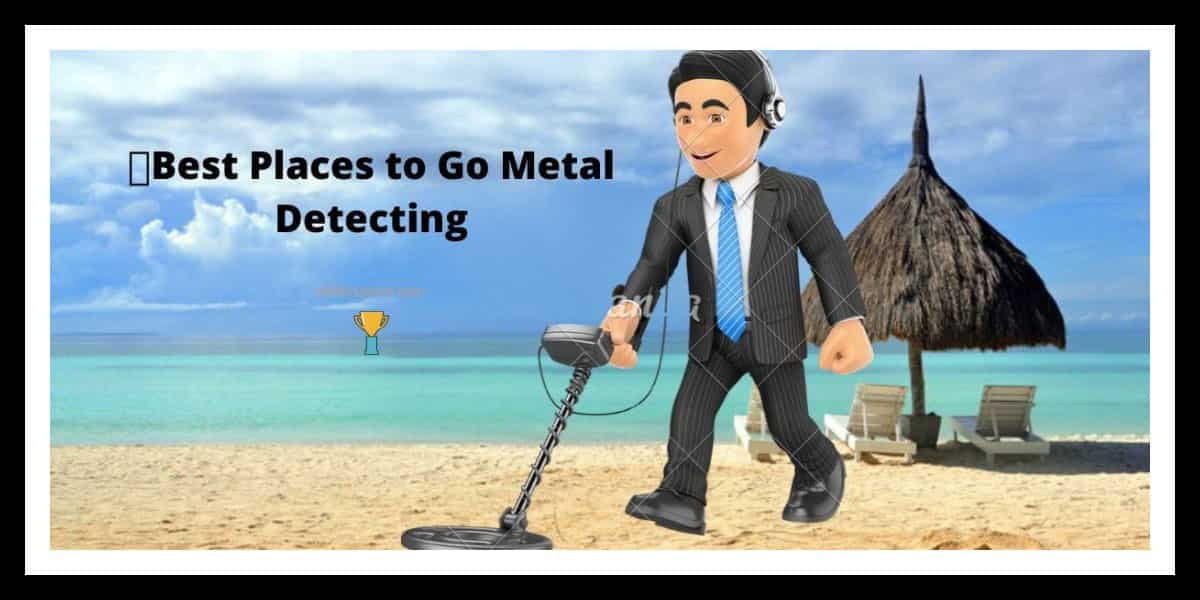 If you are a beginner, finding the right place to go metal detection seems pretty daunting especially if you are not familiar with metal detection related rules and regulations in the area. After buying a reasonable quality metal detector for your hunts, the next step is to narrow down the places you can go to for metal detection.

Basically, any area that is being regularly used, or has been regularly used by people in the past is considered as a good place to go for treasure hunting using a metal detector. In every locality or a region, there are parks, beaches, gardens and abandoned areas that make amazing metal detection sites. However, before going to one, make sure you check with the local authorities in case you need some special permission. Going without permission might cause you inconvenience.

If you are really interested in locating places that can turn out to be prosperous hunting grounds, it is important that you do some basic research and upfront planning. The first thing you should start with is the history of the area you live in. Usually, the local library or museum has a lot of information regarding the city’s history, if not, it is not difficult to find relevant information through the internet. This research before actually looking for material on the ground will help you in determining what places will be most rewarding.

Without proper research and knowledge, there is a high chance that you will be aimlessly wandering around the city looking for valuables. This proper research will help you pinpoint the locations that have a high probability of finding something worthwhile. You can also contact the local treasure hunting groups to get some insight into fruitful places for metal detection in the locality. This is not all about the best places to go metal detecting, let’s get into in-depth below.

Usually, the following places are considered most rewarding when it comes to metal detection.

If you live in a city that is by a beach or if you have a beach at a few hours’ drive from where you live, you might want to check it out for some valuables. Beaches are great places for metal detection especially after summers. Since most of the people in the area tend to spend their summer weekends swimming at the beach, carrying out fun activities or just soaking in the rays, there is a high chance some of them leave coins or jewelry behind.

After the summer, most metal detectors run to beaches since that is when they are able to find the most valuable stuff. Detectorists have even found rings and necklaces worth more than $1000 on the beaches. This holds true for shallow water areas as well.

People who visit the beach are usually very active, they are either applying lotions, getting a tan or playing sweaty sports. During this process, loose wearables and stuff from pockets tend to fall, which, thanks to the unpacked sand, gets lost in the hustle-bustle. Moreover, the wave action at the beach tends to move stuff. The water deposits jewelry items and such at the lowest point.

However, most beaches are either private property or property of the local government. This is why in most areas, you will have to take special permission for offshore metal detection. Taking permission is not a difficult task though, all you need is a signed letter which is pretty easy to get. Moreover, this letter will help you keep away from trouble, so even if it requires a little hassle, it is worth it.

Detectorists have reported that one of the best places to go metal detecting is historic homes. Even though you might have an issue getting permission to go to metal detection at historical homes in an area, they tend to produce a number of valuable things. Most of the detectorists prefer houses and areas built during the 19th century.

If you know an area like that, there is a high chance most of the valuables buried are still intact since metal detectors consider asking permissions for these very difficult and usually end up going to more common areas. Unlike beaches and parks, historic homes let you take home gold nuggets and expensive metallic crockery. Apart from this, there is a high chance that you will find a number of gold and silver coins as well as rings.

Getting permissions for these areas is easier than most people perceive. Some authorities do deny permission but, in most cases, detectorists are allowed to take their metal detectors and hunt for treasure in the front and back yard of the houses.

Many deserted towns and communities around the world have been dotted for one reason or another. If you live near an abandoned area or a deserted town, you might as well want to check it out for some valuables. These areas have either been deserted due to war or due to being haunted. In any case, there is a huge chance that the area is loaded. If the area is considered haunted, most of the detectorists are scared to make a visit, which means all the treasure inside is probably intact.

Human activity is not always the measure of a good metal detection area. There are many mining towns around the world that were deserted after the gold rush. These are perfect sites for treasure hunting since the whole area was inhabited by gold miners. There is a huge chance that you will find a nugget or two of gold. Coin hunters and detectorists suggest scanning the doorways, floorboards and walls with your scanners since that is where most people hid their money stash.

Moreover, abandoned sites where once old houses stood are places where you can find interesting and valuable stuff. In these areas, detectorists usually find stashes of money, relics and silver/gold dimes. However, to find these areas you might have to look at old maps since new maps don’t show areas that once had houses on them.

If you are interested in going to these sites, don’t forget to check with the local government since some of them have been put under protection orders.

Just like the abandoned house sites, these areas can only be pinpointed using old maps. In the early days, specifically in the 19th century, the executives, higher officials and other wealthy people of the city spend a lot of time in the swimming pools. Hence, detectorists have found loads of coins, jewelry and other valuables while searching old swim holes. Swimming holes are good areas to look for antique rings and coins.

Most of the swimming holes have not been hunted mainly because they are hard to find as compared to physical sites like abandoned houses and deserted cities. The only way to find these areas and pinpoint them is by researching the history of your town. The local government, local library or a museum in the area can help you find one.

Churches and burial grounds are one of the oldest areas in any city. Of course, you must respect the burial grounds and stay away from them in case you are metal detecting but as far as churches are concerned, after getting the required permission, you can go treasure hunting on the local church ground. Many detectorists have reported finding ancient coins and jewelry on church ground. Since these buildings and areas have been around for as much as we can remember, they are home to a lot of unfound treasures. If you have a metal detector with a high detection depth, you will have a higher chance of finding something valuable.

Some of the churches we have nowadays were built many centuries ago and just like nowadays, worshipers would gather every Sunday. In most cases, the people of faith came in with treasures as a donation to the church.

The best part is, no many churches have been treasure hunting since like old homes, churches also require detectorists to get special permissions. Which is why people tend to stay away from these areas. However, in most cases, you only need to get a permission letter signed by the churchwarden or the priest which is not at all difficult and mostly they are very cooperative. Detectorists who have been going to the church have claimed that they were never denied permission.

If you are after old relics and antiques, the best churches to go metal detecting are the ones built before the 20th century. Most of the things found are close to the walkway, so make sure you scan the area well.

Last but not least is battle sites. These areas were where many soldiers died unfortunately but are also the areas where detectorists find a plethora of valuable items. However, in order to many the most of a battle site, you need to know your history. Battles held before the 19th century were mainly fought without guns. Soldiers used to wear heavy armors and held heavy swords. All these can be detected and dug up using high-end metal detectors.

The only difficulty here is finding the battle site. Out history is filled with more than 10,000 battles. If you are lucky enough to find a battle site you will be able to find objects like muskets, pistol balls, arrowheads, bayonets, uniform buttons, powder-flask tops, etc.

However, before just jumping into selling your finds, check with the local government since there is a code of practice for historical sites. You will most probably have to report the items found. Also, there is a huge chance that the battleground is now converted into a government building or something of the sort. So, you might need to get permission for metal detection.

In this article, all the unconventional sites for metal detection were listed, apart from beaches of course. People, especially newbies, tend to go to areas like parks, stadiums, bleachers, fields, footpaths, etc. for metal detection. No matter how convenient they are, the chances of finding valuable stuff in these areas are very low. Mainly because the area is easy to access and most detectorists keep checking for new stuff every now and then.