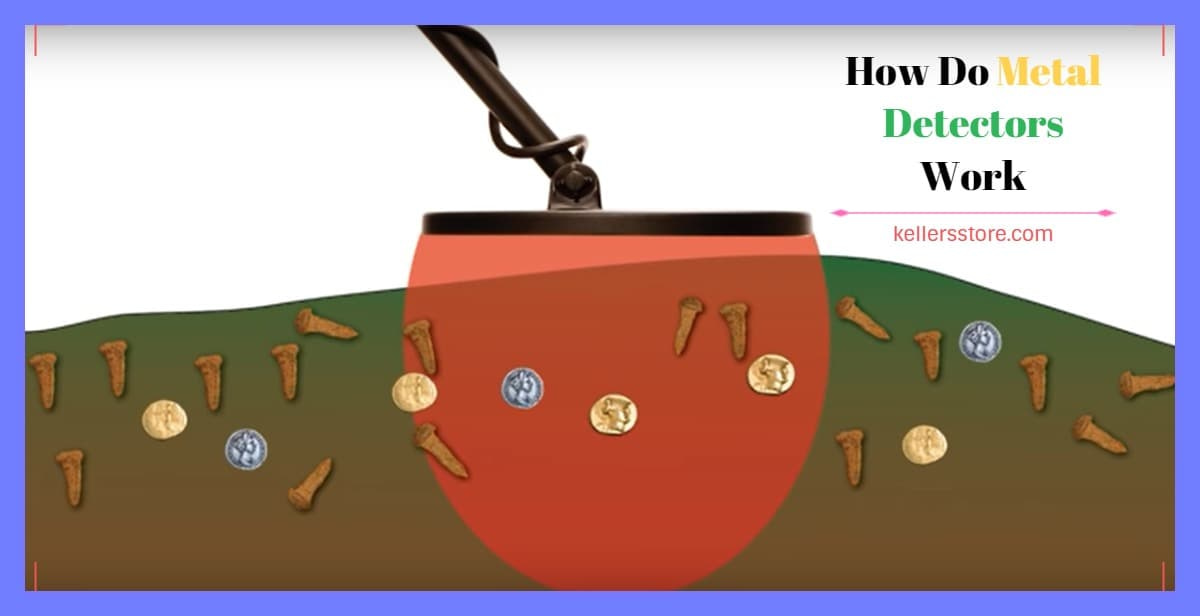 However, today we are talking about the consumer-oriented metal detectors specifically designed for people interested in metal related excavations. You might have seen people walking around with a stick-like object wearing headphones. These are the metal detectors most people use to find buried treasures on areas like beaches, old towns, abandoned parks etc.

These devices are extensively used for finding buries the metallic object. Some of them can discriminate among the type of object buried while others can only tell you that there is something underneath the ground. If it turns out to be garbage, that is your luck.

In this article, we will explain the basic working of a metal detector. This will not only help you understand how do met detectors work but will also help you in choosing the metal detector that will work best for your needs.

Usually, metal detectors are very lightweight yet durable and sturdy. Since they need to be operated with one hand, they are designed such that they don’t weigh a lot. Moreover, good manufacturers use reinforced materials for the construction of these devices to ensure sturdiness on top of the lightweight structure. The main parts of every metal detector include.

This unit is included in the system to keep the device steady as you move back and forth looking for metallic objects buried in the ground. However, if you invest in a low-end and low-cost product, it might not come with a stabilizer.

Just like every other gadget and electronic, a metal detector also comes with a control box that is extremely crucial to the working of the device. A typical metal detector’s control box includes the circuitry of the system, the control (of course!), the speaker for producing the beeping sound, headphone jack for connecting headphones (optional), batteries for powering the device and last but not least the microprocessor to drive and control the metal detector based on the commands given by the user.

The shaft is the long tubular rod in the middle of a metal detector. This basically connects the control box of the device to the coil that is responsible for detecting the metals buried inside the land. Usually, the shaft of the metal detector should correspond to your height.

This is the coil that is connected by the shaft to the control box. It is also referred to as the search head, the antenna and the loop of the metal detector. It is responsible for producing electromagnetic rays that go into the ground and come back.

Basically, the operation of a metal detector is as simple as its construction. All you have to do is turn it on and slowly move it over the area you wish to explore. As soon as it rapidly starts beeping, stop there, you might have found something valuable.

How Does Metal Detector Technology Works?

Metal detectors typically come with three types of technologies. These are:

This is one of the most common and most popular detection technologies currently being used. It is also called induction balance and works by using two coils i.e. Receiver coil and transmitter coil.

The transmitter coil which is loop with the outer coil, electricity is passed through it in varying directions at a certain frequency depending on the type of object the user wants to locate. The receiver coil, on the other hand, which is loop with the inner coil, that is used to pick up the frequencies coming from target options inside the ground.

This technology, unlike the very low-frequency technology, uses a single coil as both receiver and transmitter. Sometimes pulse induction technology comes with two or three coils working together however, that is rare.

On average, a typical metal detector with pulse induction technology sends 100 pulses per second. However, this number varies based on the configuration of the coils according to the manufacturer.

Even though Very Low-Frequency technology is more popular, the beat frequency oscillation is the most basic way to detect metal. It basically uses two coils of wires. The main and large coil is installed in the search head while the secondary coil is installed in the control box. The coils are connected to an oscillator which is responsible for generating more than a thousand pulses per second.

Radio waves are generated when these pulses go through the coils. These waves are converted by a receiver into an audible series of tones depending on the frequency. If a metal object is found, the frequency of the radio waves is interfered with, hence, changing the audio.

This is not all about how do metal detectors work. Let’s deep into the below

The Workflow of Metal Detectors Examples

Overall, metal detectors are very simple and uncomplicated devices, which is why their workflow is considerably easy to understand.

When the device is turned on, the battery in the control box powers the whole system which also activates the transmitter. This transmitter activates the electricity pulses that go down the handle to the head coil.

These electrical pulses are responsible for creating a magnetic field around the head coil. This magnetic field then interacts with metal objects inside the group and notify the user.

Metal detectors are ideal for finding hidden treasures and metallic objects; however, most metal detectors can only detect objects buries less than 1 feet deep into the ground. On average, metal detectors have a maximum depth between 8 inches and 12 inches. This is not constant though; the detection depth depends on several factors. These factors are:

The type of underlying technology used in the metal detector is a major factor that determines the detection capabilities of the detector. Moreover, there are other factors as well that differentiate the detection abilities of detectors that use the same technology. For example, in VLF metal detectors, the machines that use higher frequencies or have larger coils have a higher detection depth. Moreover, the quality of the coil used also has a large effect.

Even though most people don’t think this is an important factor, the type of object being detected also plays an important role. For example, a metallic object with larger quantities of iron creates a larger counter magnetic field and can be detected even if it tops the maximum detection depth.

Size of The Object

Object halo is basically the area around the object. If a metallic object has been in the ground for long, especially an iron object, it increases the conductivity and metallic properties of soil around it. Hence, detecting objects like these is easier since the magnetic field created by the object also resonates in the area around it.

At times, when you are looking for metal objects, there is a lot of interference due to wires and pipes in the surrounding area on in the area directly under the metal detector. This affects the efficiency and the detection depth of the metal detector.

People, especially the elderly have been going metal detecting for years now, which is why the probability of finding something very large and valuable is pretty low. However, people still go metal detecting and have found out the pattern of how and when they can find things that are worth something. Metal detection as a whole has been divided into four categories:

Here is our popular post about metal detecting for the beginner: Ultimate Guide to Metal Detecting: Must Read

People usually go coin shooting i.e. finding buried coins using metal detectors, after large even such as a ball game, a concert or a family festival almost always helps you find something good. People even end up finding pieces of jewelry.

This is when metal detectors set out to find valuable things such as gold or platinum nuggets. These excavations are usually carried out on areas that are known for housing such as precious items.

Treasure hunting is exactly what the name suggests. Groups of people go out to find chests and boxes filled with treasures. Mostly areas that have been rumored to have hidden gold and silver caches are checked out.

Other Things Metal Detectors are Used For

Other than consumer-oriented metal detectors, companies also manufacture metal detectors for security purposes. They have the same underlying technology however, they are smaller in size and are handheld.

Most of the time, the coils used are also small since they are not concerned about the detection depth. Most commonly, metal detectors, apart from hunting for treasures are used for:

Metal detection is one of the most rewarding hobbies that people take up. If you are interested in metal detection, the first thing you should do is join a local club or organization. This will not only help you in finding the best special metal detector but will also help you in locating areas with most buries treasures.

Apart from this, you must know how do metal detectors work. This is crucial since, only if you know how the underlying technology work, you will be able to choose the right metal detector. It is advised not to invest in a very expensive metal detector at first. You should go for a low-level metal detector and work with it till you understand how things work.