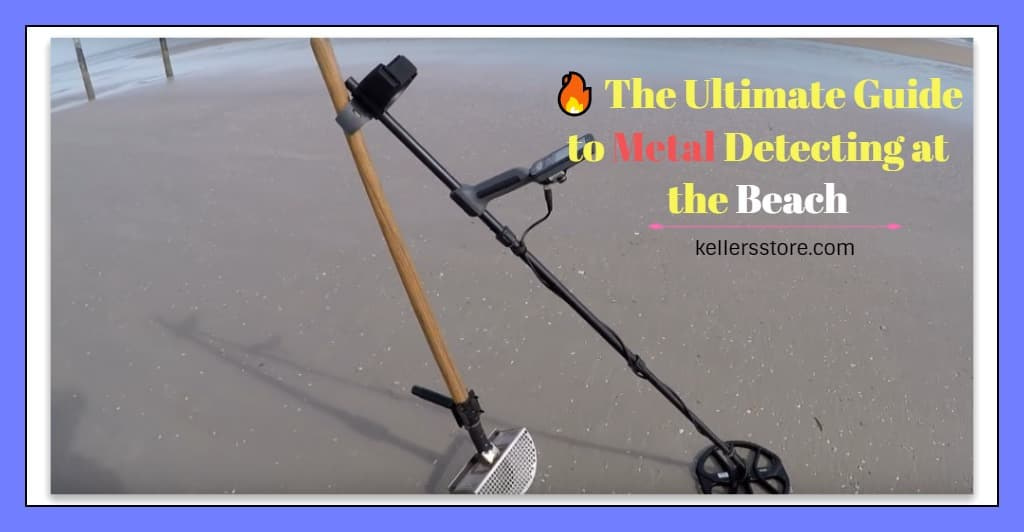 Over the past few years, metal detection has grown immensely popular. Hobbyists are always looking for new places to explore and go to metal detection. However, nothing beats the productivity of a beach, especially for newbies. In this article, you will learn how to metal detecting at the beach?

Beaches are one of the most crowded areas in the city and based on studies, it is the place where people lose the maximum number of valuables. According to hobbyists, going metal detection on beaches is one of the most productive ways to use your metal detector. People have been known to find rings and similar valuables that have been buried for years.

If you have decided to take a trip to the shore for metal detection, but don’t know where to start. You are at the right place. This ultimate guide to metal detecting at the beach will help you get the hang of how things work and what needs to be done.

So, without further delay, let’s start.

Metal Detecting at the Beach: Why?

Going to the beach for metal detection is considered by far the most productive and rewarding. Most of the time, people end up finding jewelry items like rings, diamond earrings and necklaces in rare cases. It is only natural that when the skin is exposed to the saltwater, it shrinks and jewelry falls off.

In some cases, hobbyists are even able to track the user and return the items to their owners. Beaches are restocked with lost valuables every day, especially in summers, since it is the most crowded place in any city.

Let’s start by picking the best equipment for your metal detecting at the beach since the efficiency of the detector decided the type of treasure you will harvest. The most important concern while investing in a metal detector for detection at the beach is how the equipment will deal with the high quantity of mineral present in the sand. The saltwater and the hot rocks found at the beach pose as high-level distortions when looking for metallic objects.

Even though saltwater beaches are the best places to look for metallic treasure, the minerals in the water amplify the normal groundwater and result in false signals and detections.

On the other hand, if you don’t have a budget issue and are ready to spend some money on the proper equipment, metal detectors with Pulse Induction (PI) circuitry work wonders when it comes to detecting metals on the beach.

Some of the best metal detectors for beach metal hunting are:

According to metal detection experts, saltwater deposits objects with similar weight, density and structure in the same area. Hence, when you go to beaches, you find shells clustered in one area. The same goes for rings, coins, earrings, chains and necklace pendants. All objects of similar structure and weight are deposited in a close radius to each other.

Thus, if you find a ring or a valuable item, you will most probably find a few others in the same area. Metal detection at the beach, however, is not without its cons. Since it is a crowded area, you will also come across a lot of garbage like metal cans, metal straws, etc. Nevertheless, your efforts always pay back sooner or later.

Amateur metal detectors have reported findings of more than $1000 in one go after a crowded day. Most of these findings are from crowded beaches, but people also tend to find valuables at private beaches.

Unfortunately, it is a common misconception that metal detection at the beach is considered as something that does not require effort, technique, and skill. However, if you let go of the basic metal detection technique, and just start looking for valuables and items of use haphazardly, you will never find anything worthy.

To maximize your finds and to ensure you catch something, walk slowly along the beach line. Keep swinging your search coil from one side to the other but make sure you do it steadily. When a famous detectorist was asked for a piece of advice for beginners, all he has to say was, “Don’t move around haphazardly. Work in a planned pattern based on a devised method”. You can either plan a pattern in your mind or can grid the beach to ensure that every corner of the beach is covered.

For those who don’t know, Gridding is not drawing blocks on the sandy beach rather it means walking parallel to the water from one side to the other, and then stepping one foot to the side while making your way back to the starting position. Make sure the grid lines have a slight overlap so that you don’t miss any points. If you want to, you can mark your grid lines using a scoop on the beach.

Just like every other task, the more effort you put into metal detection, the sweeter will be the results. If you do the task in a fast manner, it is unlikely that the metal detector will pick any signals. However, if you swing the device slowly, it will have more time to pick signals and will scan deeper.

Since, for most productivity, you want to go metal detecting as close to the shore as you can, having the know-how of tides and the way they work is super important. We do have shallow water metal detectors in the market that allow you to detect as much as 10 feet deep in the water. However, they are pretty expensive and not many people can afford to invest in them. You can pick all round metal detector from here.

Beaches are every changing, whether it is the water level, the mineral quantity of the sand or the structure of the area. Hence, as a detectorist, it is important to know how the beach alters with seasons, tides and weather patterns.

The Motion of the Sea

Now that you have understood how tides work, it is equally important to understand how the motion of the sea works.

On pebbled beaches, have you ever notices one side of the beach has larger rocks while the other side has a number of small and fine pebbles? This is because of water deposits items of similar size, density and structure in the same area. While going metal detecting, focus on areas with small and fine pebbles. Usually, water carries valuable items in that direction. Jetties are another good option to check for valuable items since jewelry tends to get caught in water currents.

Apart from this rock pools trap tidal action twice in a day. They are natural holes that trap different items being carried away by the water. Technically, rock pools fill with treasure twice a day.

Moreover, rock pools are amazing places for crab hunts, hence, many people go there looking for crabs. There is a good possibility that something slips for their hands or wrists while catching the crabs.

If you are familiar with how things work in the metal detection world, you will know what the towel line is. However, for those who don’t know, the towel line is a term used to refer to the area where tourists and locals place their towels. The towel line, in most cases, is just above the high tide mark and is denoted by the presence of seaweed and other bits in the area.

Since this is the area where people change, apply sunblock, ruffle through their bags, etc. many objects fall off. You will find cream bottles, sunglasses, beer cans, and whatnot. However, in most cases, metal detectors tend to find most of the valuable items around the towel line or in the area that the high tide covers twice a day.

Does ‘Beep Beep’ mean you found something?

Just because your device has started beeping don’t jump into thinking you have found your target. Have you ever tried digging into sand? It is much more frustrating than digging soil. Soft sand is considered almost impossible to dig. As soon as you dig a hole, sand from the side slips back in filling the hole. This keeps on happening till infinity.

However, as far as wet sand is concerned, it is easier to dig and even though the hole fills with water, you will be able to dig deeper than with dry and soft sand. Also, while digging, make sure you keep on checking the discarded pile of sand, again and again, to ensure your target has not been discarded as well. Since most of the valuables found are pretty small, they can be easily scooped out with extra sand.

Last but not least is the permissions and permits. Most newbies ignore this part and go for metal detection to the places they like. However, apart from public beaches, you will have to apply for permits and permissions. In some cases, public beaches also require metal detectors to take special permits. This is mostly because of security reasons. Most of the time, acquiring permits is not very difficult, the authorities just want to know the activities being carried out in their supervised area.

If your public beach requires permission for metal detection, you will have to go to the local government. However, if you want to go metal detecting on a private beach, you might want to talk to the owner.

Over the past few years, metal detection has gained massive popularity as I have already mentioned. However, the whole package comes with its pros and cons. If you are trying to get into metal detection just for the sake of making money, know that you will have to go a long way before you make a career out of your hobby.

Every hobby comes with its ebbs and flows. Metal detection, even though it is a very productive hobby to take up, requires plenty of investment. Cheap and reasonable metal detection equipment is not usually very efficient. However, according to famous detectorists, it is important that you focus on your technique first and then focus on buying top-notch premium-quality equipment. Here is our best review bounty hunter metal detector, you can check it.

Once you are fluent in metal detection, you can go on with your solo treasure hunts. Lastly, it is extremely important to understand that metal detection requires a lot of patience. You will not get a big bounty on the day you start. There will be days when you won’t find anything at all, however, keeping consistent is the key to becoming a good and intuitive metal detectorist.

This article was all about giving you an ultimate guide to metal detection so that you get a kick start to the new hobby you want to take up.